Modelling the mesopelagic fish across the world’s oceans

Modelling the mesopelagic fish across the world’s oceans

We usually consider the fish community as being “well-mixed”. What this means is that we model the fish food-web, but we do not represent how fish distribute themselves horizontally or vertically. We make this assumption because many fish are very mobile and distributed over large areas. As long as we model one ecosystem, such the North Sea or the Benguela Current, this assumption is reasonably justified. However, when we consider the global ocean, we need to account for the spatial differences in the fish community.

Further, when we move across the continental shelves, we need to consider that fish live at different depths. Some species are pelagic and live in the upper sunlit ocean, for example “forage fish” species like herring and anchovies, or large pelagic predators like tuna. Others are benthic and confined to the sea floor, or they are “demersal” generalists that feed both on the sea floor and in the water column. In between these groups are the mesopelagic fish that live in the twilight zone during the day and migrate up in the water during night. To resolve this vertical structure of the fish community DTU Aqua has extended the recent FEISTY fish community model. 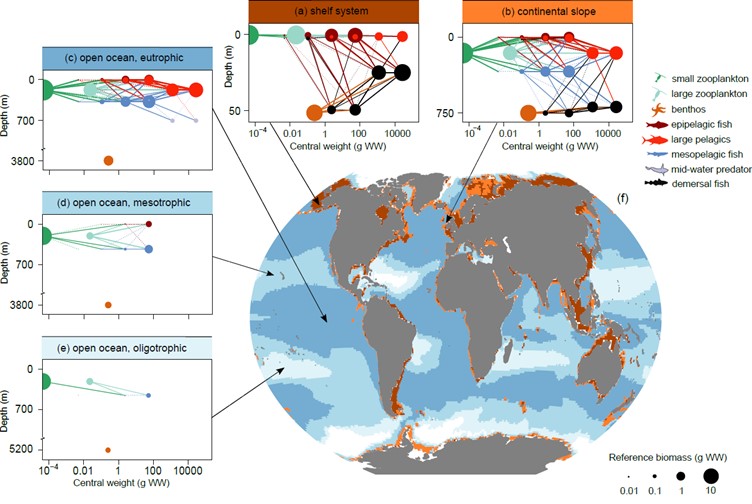 The ”FEISTY-VerticalTrait” model predicts the vertical structure of the fish community. The structure is determined by the water depth, the zooplankton production and the benthic production. In the figure above we see how the fish community varies. Look for example at the large pelagic predators (red). They are strongly present on the continental slopes and in the eutrophic parts of the deep ocean. And we are of course particularly interested in the mesopelagic fish (blue). They are absent on the shelves but appear on the slopes and throughout the open oceans:

Next we will explore the effects of fishing on the mesopelagic community.

About the Author: Emily Cowan