Mesopelagic fishes in a hurry

Mesopelagic fishes in a hurry

Mesopelagic fishes form deep acoustic scattering layers during daytime and, to a varying degree, occupy upper waters at night. The diel vertical migrations relate to changing light levels. The duration of twilight periods may be key in the trade-off between feeding opportunities and predation risk. Planktivores that locate their prey by sight and in turn are subject to predators that use sight to locate them might exploit brief “antipredation windows” at dusk and dawn for “safe” foraging on numerous prey in surface waters. Latitude affects the rate of light changes and the duration of the twilight periods at dawn and dusk with the fastest changes and shortest twilight periods at low latitudes. We therefore set out to see if the rapid changes of incoming light at low latitudes translate into fast diel vertical migration velocities of mesopelagic fishes and affect their behavior at twilight periods (access the full paper here). We used an upward-facing echosounder located at the bottom of the Red Sea (22 ºN), continuously scanning the ~880 m water column for 10 days (Figure 1). 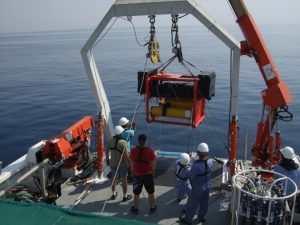 Figure 1. Deployment of an autonomous echosounder in the Red Sea. (Photo by UiO)

The study unveiled rapid vertical migration speeds (Figure 2), at about the double of the global average. Moreover, striking patterns appeared at dawn and dusk, also varying between days. Visits in upper water by some of the layers were strikingly brief, around 10 min, and included unusual rapid ascent and descent (up to 22 cm s-1). Relative to the size of the fishes, these are extremely fast vertical relocations, apparently representing 5-10 body lengths per second. In one sense, the patterns of mesopelagic fish in a hurry concurred with expectations and we argue that rapid shifts between day and night are inherent in structuring marine ecosystems at low latitudes. However, it became evident that light alone could not explain the behavior. There was a high degree of behavioral plasticity, possibly related to the arrival of predators. We suggest that the behavior of mesopelagic fishes in upper waters relates to their respective light sensitivities, but is controlled by the arrival of predators.