The microbial food web – a key player in the ocean

The microbial food web – a key player in the ocean

Just like in any food web, organisms in the oceans find different ways of making their living; they take up different roles in the food web. Tiny algae, so called phytoplankton, make up a large proportion of the primary producers. While they all grow by taking up CO2, inorganic nutrients and sunlight as their energy source, they differ widely in shape, size and ‘lifestyle’. A similar wide range of different types of single and multicellular organisms consider these algae their favourite meal of the day. These predators are then themselves considered juicy food by larger predators, who are preyed upon by even larger organisms, and so forth… you get the picture. This game of who-eats-whom goes all the way to the top of the marine food web where the result might end up on our dinner plate. 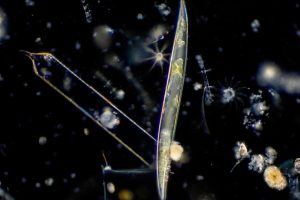 However, it is the microbial food web made up of small planktonic organisms at the lower part of the food web that is the productive base of marine ecosystems defining the structure of oceanic food webs and biogeochemical cycles of many elements. Due to the different lifestyles of these microbial organisms, the food web varies widely in different locations throughout the year and with ocean depth. These differences have important implications for the oceans ability to sustain large fish populations and are critical for the oceans uptake of carbon dioxide and its sequestration to the bottom of the sea, the so called biological carbon pump. For more on the ocean’s carbon pumps, see the blog entry by Adrian Martin.

Many mesopelagic fish and small crustaceans undergo diel vertical migration, the daily travel from the depth of the ocean to the surface layer during night and back again. This mass migration impacts not only the three main fluxes of the biological carbon pump (the gravitational flux, the DOC flux and the active flux), but also increases vertical connectivity between the habitats existing at different depth of the ocean. This, together with sinking material and the different communities living at different depth, forms a complex interplay that scientist are still trying to unravel today.

For the SUMMER project we (at the University of Bergen) use numerical modelling approaches to simulate the pelagic microbial food web in a one dimensional water column. The model results will help us to improve our understanding about the role microorganisms play in the ocean, in particular for carbon sequestration and for sustaining fish populations, including mesopelagic fish.