With a changing climate, it is important to understand the links between ocean productivity and fish food web variations – in order to predict future changes in fisheries production. Benthic (seafloor) and planktonic (surface) energy pathways sustain the food webs of fish. In a recent paper by P. Daniel van Denderen et al. they examine whether a trait-based fish model can be used to predict global fisheries production.

It is shown how ocean productivity and seabed depth shape the dominant traits and energy flow in fish communities. For example, most shallow shelf areas have high benthic production, favoring demersal fish such as cod and halibut, which feed on both pelagic (open ocean) and benthic (seafloor) pathways. In the deeper ocean regions however, pelagic and benthic pathways are decoupled. Within deep ocean areas with high productivity, large pelagic fish coexist with epipelagic, mesopelagic and mid-water predators. Meanwhile, in deep areas with lower productivity, the fish community gradually shifts towards more and more mesopelagics. This is due to the diel vertical migration of the zooplankton community which benefits mesopelagic fish. Due to the low productivity and abundance of the mesopelagic community here, pelagic predators are unable to inhabit these areas. 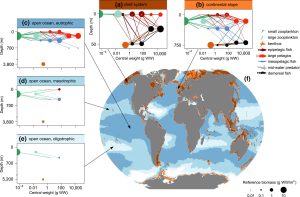 In conclusion they found that the distribution of fish biomass depends on pelagic and benthic secondary production, and is strongly mediated by seabed depth, which (indirectly) controls the amount of detritus reaching the seabed, fish vertical behaviour and fish cross-habitat feeding. The authors show how these forces can be used to simulate fish biomass and feeding interactions across ocean biomes on a global scale, which is useful for predicting fisheries production, and also carbon sequestration