During one month they have travelled along the coast of Spain (Bay of Biscay, Asturias and Galicia), Portugal, part of the coast of Morocco and the Mediterranean as far as the Alboran Sea. During their journey they have collected data and samples that will be used to apply different analysis to resolve some of the unknowns of the mesopelagic ecosystem.

Cristina Claver, from the AZTI technology and research centre, is focusing on the monitoring and evaluation of the mesopelagic zone using genomic techniques and joined this expedition to collect environmental DNA from water samples from the depths. Later, these samples will be analysed using different techniques to determine which species inhabit different areas and depths of the ocean.

Will Major and Jack Williams from the National Oceanography Centre in Southampton carried out gravitational flux measurements by performing sinking velocity experiments on particles collected from the Marine Snow Catchers. They also took photos of the marine particles in situ with special cameras; the Red Camera Frame.

María Couret and Javier Díaz from the University of Las Palmas de Gran Canaria took zooplankton samples to quantify, via respiration analyses, the transport of carbon to the deep layers of the ocean by organisms that perform vertical migrations.

Alix Rommel from the University of St Andrews collected acoustic data with the EK80 scientific echosounder to study the Deep Scattering Layer. This layer is composed by mesopelagic organisms (crustaceans, fish, cephalopods, zooplankton…). Some of these organisms are the ones that carry out vertical migrations, which can be observed in real time with the echosounder on board the ship.

Many thanks to Thunnen Institute, the campaign coordinators for inviting us.

Text and picture by the SUMMER partners aboard the RV METEOR 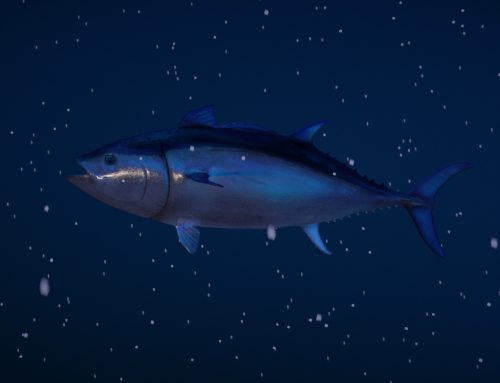