Tunas are some of the most commercially important, and valuable fish worldwide. They belong to the mackerel family, and there are currently 8 different recognized tuna species. Tunas are also one of the most eaten fish in the world, being sold both largely available as canned tuna, but are also sold in exclusive markets in Japan, where prime individuals may be auctioned for more than a million euros! 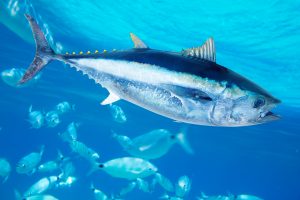 Atlantic bluefin tuna (Thunnus thynnus) is characterised by having a dark blue colour on their tail, back, and around their fins. They also have shorter pectoral fins than other tuna species.

The Atlantic bluefin tuna (Thunnus thynnus) is the largest tuna species. It can grow to be extremely large, recorded up to 680kg in weight. Their bodies are extremely streamlined – just like a torpedo, and they are designed to be fast and persistent swimmers. The tunas enourmous physical strength, coupled with efficient blood circulation leads them to be able to swim constantly, and reach speeds of up to  70 km/h. As a matter of fact they must keep swimming indefinitely with their mouth open to oxygenate their gills, as they are not being able to do this while standing still! 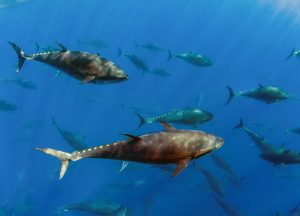 Atlantic bluefin tunas can hunt in groups of 20-30 individuals, making them effective predators in the pelagic environment.

Tunas are pelagic fish, meaning that they live in the open ocean water masses.  But did you know that the tuna frequents the depths of the mesopelagic zone, diving down to depths of almost 1000 meters? They are fast and agile hunters, with a diet consisting of large proportions of mesopelagic species such as pearlsides, lanternfish and squid. This means that they often dive down to the mesopelagic layer to feed! (1) 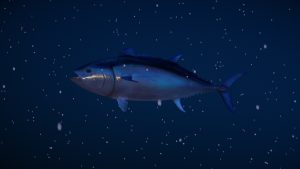 3D Model of the Atlantic Bluefin tuna, from our latest video.

The Atlantic bluefin tuna is one of the few fishes that can maintain a body temperature higher than their surrounding water. They do this through a countercurrent exchange of blood, efficiently transporting warmth from one blood stream to another. This makes them able to tolerate colder waters while hunting in the deep chilly waters of the mesopelagic zone, and the in the cool waters of the North Atlantic. With its streamlined body, strong swimming muscles and large size, the tuna is one of the apex predators of the mesopelagic zone. So the next time you are eating a tuna sandwich, you can think of all the different mesopelagic organisms required to feed it which allowed it to grow and survive, before it ended up on your plate!

Want to see more interesting and fascinating mesopelagic organisms? You can have a look at them in our latest video, below. 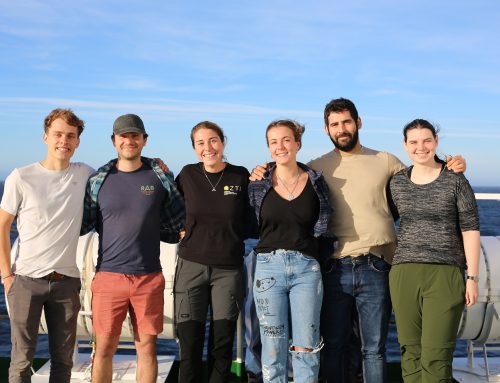