Since its discovery by newly-invented sonar [1] during the Second World War, the composition and importance of the deep scattering layer (DSL) has been a subject of debate. From the initial questions of “What is it?” and “If it is not an electronic artefact, is it a phenomenon of physical or biological origin?”, to “Which organisms cause it?” and, more recently, “How abundant are they?”, our knowledge of the mesopelagic ecosystem has progressed at a very slow pace. One of the main features of the DSL, its diel vertical migration (DVM) across physical gradients, provided the answer to the first question. This vertical migration is the key feature when considering the role of mesopelagic organisms in the marine ecosystem and global biogeochemical cycles because it facilitates downward transport of carbon and other elements. The DSL is ubiquitous, present in all oceans around the planet [2]. Our identification of the main organisms within the DSL is still far from resolved; early studies suggested that euphausiids and siphonophores were the main sources of echoes [3, 4], whereas the more recent view is that mesopelagic fish contribute a substantial proportion of the DSL [5, 6]. However, the relative contribution of each of the components to the measured backscatter remains unresolved, yet it is key to accurate determination of biomass [7]. Nevertheless, the DSL is the most striking biological feature in the open ocean and we already know that mesopelagic fish are undoubtedly the largest fish biomass in the ocean and the most abundant vertebrate in the planet.

“Every time we think we understand the [deep ocean] ecosystem and the organisms, they manage to produce a new rabbit out of the oceanic hat, so that we are required to readjust our previous perspective.” – Peter Herring [11]

Recent research estimates suggest that the biomass of mesopelagic fish is 10,000 million tonnes, one order of magnitude higher than previously thought. Despite a high degree of uncertainty this is 10 times more than all other fish together [8-10]. The discovery of such a large biomass of mesopelagic fish could be the new rabbit pulled out of the oceanic hat [11]. It is potentially a paradigm-shifting discovery and it forces us to reconsider what we thought we knew about the ocean. The mesopelagic ecosystem is a major component of the global ocean, but it remains practically unknown from the physiology of individual fish to their global biomass and consequently their role in the ecosystem and geochemical cycles [12]. 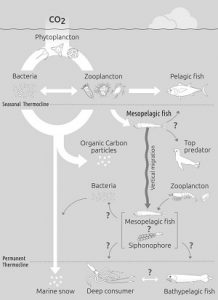 About the Author: Kaja Haug