Possibilities and limitations of opportunistic sampling of the mesopelagic layer

Possibilities and limitations of opportunistic sampling of the mesopelagic layer

The Marine and Freshwater Research Institute (MFRI)  in Iceland explored options for opportunistic sampling of the mesopelagic community during the Icelandic part of the International Ecosystem Summer Survey in Nordic Seas (IESSNS) from 2018 to 2021 (Figure 1a-d). Mesopelagic samples were collected from routine acoustic measurements, trawling, and environmental measurements of IESSNS thus demanding no extra survey time and no extra scientists onboard, i.e. no additional survey cost. 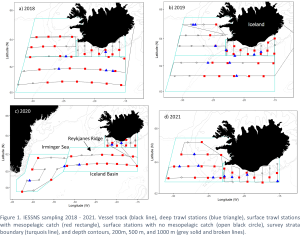 IESSNS is an ecosystem survey researching oceanographic condition and biota from surface to 500 m deep-layers. In the context of SUMMER, data from this survey collected in geographical areas where mesopelagic occur, are analysed and provided to partners for the estimation of mesopelagic fish biomass. The main goal of the survey is swept area measurement of mackerel density in the surface layer using standardized trawling, trawl headline visible in surface and footrope at ~35 m depth, at predetermined positions, and acoustic recordings of herring and blue whiting along survey transects. There is opportunistic trawling on acoustic recordings targeting blue whiting. A specially designed scientific trawl, Multpelt832 with 40 mm codend, to catch pelagic fish is used for all trawling. Furthermore, at all predetermined surface trawl stations, prey abundance of pelagic fish is estimated, by measuring zooplankton density from surface to 200 m depth, and environmental condition are estimated by measuring temperature and salinity from surface to 500 m depth, using a CTD.

Acoustic measurements during IESSNS south of Iceland show a mesopelagic layer during the day at approximately 300 m to 500 m depth (Figure 2). The mesopelagic layer undertakes diurnal vertical migration during the short summer night, approximately five hours between sunset and sunrise. In the Irminger Sea, part of the mesopelagic layers does not migrate to the surface compared to most the layer migrating in the Iceland Basin. Despite limited backscatter being visible in the surface layer during the long summer days, mesopelagic fish is caught annually at 59% to 77% of predetermined surface trawl stations and at all deep stations targeting the backscattering layer.

Figure 2. Backscatter difference between 18 kHz and 38 kHz frequencies on a west-to-east transect south of Iceland, latitude 61.85 °N, during IESSNS 2019. Backscatter collected during sampling at stations is excluded (black vertical bands). The transect is approximately 480 nautical miles or 900 km long, begins July 19th at 7 pm and ends July 22nd at 2 am. Vertical sampling depth is 750 m. 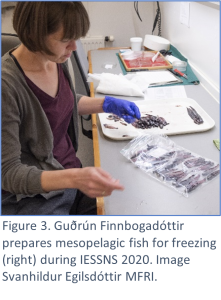 The opportunistic sampling protocol for mesopelagic fish during IESSNS has evolved during the four-year sampling period to better meet sampling demands of SUMMER partners. In the early years, 2018 – 2019, the sampling was increased effort in sorting all trawl catch to species, to measure total length of 50 specimen for all species per station, and to freeze an undefined quantity of the major species (Figure 2). From 2020 onward, the sampling protocol was expanded to include total weight of 50 specimens and to individually freeze 50 specimens, per species per station (Figure 3). Environmental DNA (eDNA) has been samples at selected predetermined surface trawl stations using water samplers attached to the CTD during all years.

During the four sampling years, 33 mesopelagic fish species have been caught (Table 1, Figure 4). Species composition varies between years with only 6 of 33 species caught in all four years. The frozen fish samples will be analysed by several SUMMER partners and contribute data to SUMMER work package (WP) 2, WP3 and WP5. Furthermore, IESSNS sampling has also contributed acoustic data to SUMMER WP2, eDNA samples to WP2, and two SUMMER collaborators, Martina Blumel from GEOMAR and Enrique G.A. Garcia from DTU, joined the survey in 2020 and collected opportunistic fish and zooplankton samples for WP2 and WP5. 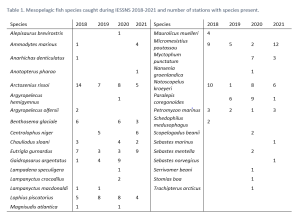 Opportunistic sampling has contributed valuable data to SUMMER but it also has several short comings as a method to collect in situ data for researching the mesopelagic fauna. Most importantly the trawling was not targeted on the mesopelagic layer but was either at predetermined locations in the surface or targeting blue whiting deeper in the water column. Such sampling does neither provide species composition nor species

abundance in the mesopelagic layer. It does provide indication of species presence, geographical distribution range and provides samples of biological research, mostly for mesopelagic species which migrate into the surface (0 to 35 m). The additional opportunistic sampling for SUMMER increased personnel workload in recent years. Specifically, filtering of sea water for eDNA was challenging due to limited personnel. Inviting project partners to join survey for collections of opportunistic sampling resulted in a more reasonable workload. Hopefully, scientific partners can join MFRI future opportunistic IESSNS cruises to help us to better understand the dynamic of mesopelagic fish species.