On causality or science behind the papers

On causality or science behind the papers

As in movies, science has a behind the “paper” history that illustrates the continuous challenge of hypothesis implicit to the scientific process. Here, we will tell you about one of those histories related to our friends, the mesopelagic fishes. Sometime during 2015 a group of researchers, presently involved in the SUMMER project, analyzed the vertical distribution and vertical dial migration of mesopelagic fishes around the world (Klevjer et al., 2016). They found that the proportion of fish migrating daily from the mesopelagic layer to the surface was related to water temperature and oxygen content. All fishes in warmer waters with low oxygen concentration migrated daily, whereas in colder waters with more food the proportion of fish migrating was much lower (Fig 1). 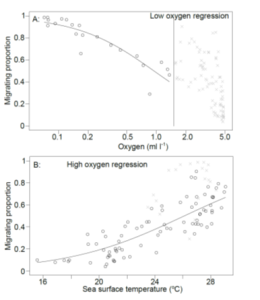 Furthermore, they found there was a relation between the oxygen content in the deep waters and the average position of the fish in the water (Fig 2). The less oxygen in deep waters, the shallower the fish were. Based on that correlation and on the logic that fish need oxygen, they hypothesized that oxygen was controlling the vertical position of fishes at daytime. 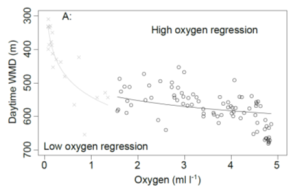 Figure 2: Relation between oxygen concentration and the weighted mean depth of the mesopelagic population from the Malaspina expedition (Figure from Klevjer et al., 2016).

However, scientists should remember that correlation and causality are not the same thing. Umbrella sales and tree leaves fall are correlated, but umbrellas are not bought to protect us from leaves, there is another hidden causality behind that correlation, rain. Following that reasoning, another scientist involved in SUMMER, Dag Aksnes, pointed out that although the correlation was there, in the data mesopelagic fishes did go and stay into the anoxic layers (Fig 3). In fact, it is known that many mesopelagic fishes have developed physiological adaptations to support for long periods anoxic conditions. In fact, this may help them escape sea mammals, that can dive deep, but need oxygen. Some species like elephant seals spend months at sea diving deep to get fat on mesopelagic organisms. Anoxic waters may be a refuge for such predators. 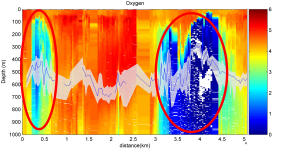 Figure 3: Average depth distribution at daytime of the mesopelagic population along the track of the Malaspina expedition around the world /Figure from Klevjer et al., 2016).

Anyway, re-analyzing the same data carefully, Dag showed that the reason behind the correlation was not oxygen, but light (Aksnes et al 2017). 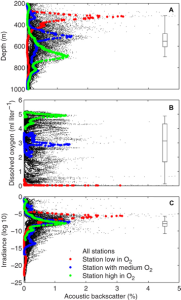 Figure 4: Distribution of the acoustic backscatter in relation to depth, oxygen and irradiance. Figure from Aksnes et al., 2017. 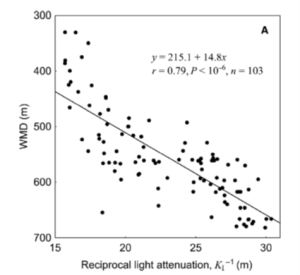 Figure 5: Relation between light attenuation and the weighted mean depth (WMD) of the mesopelagic population from the Malaspina expedition (Figure from Aksnes et al., 2017).

Higher contents of dissolved organic matter in the water cause oxygen depletion because bacterial respiration, but also higher light attenuation in the water column. Organic matter is the “rain” behind the correlation between oxygen, light, and vertical position. 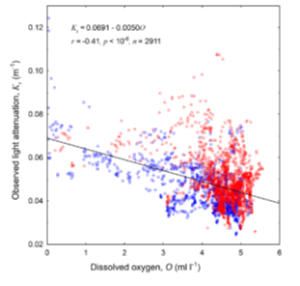 And mesopelagic fishes are visual organisms looking for the range of illumination that optimizes the balance between seeing their prey and not being seen by their predators. In truth, just a picture of a mesopelagic fish illustrates that vision is important for them:

To finalize, observe that the same group of scientists changed their mind about their hypothesis in about one year. That’s at the basis of science, hypotheses are tested against new data and analysis, and they are good if they withstand the test. There is nothing sacred about them, not based on who produced it, not on how long they have been accepted, just passing the test of data.

Text written by Xabier Irigoien, AZTI. Pictures and figures credited in their description.