One of the main goals of the team from the University of St Andrews in SUMMER is to estimate the biomass of fish in the mesopelagic zone (200 – 1000 m depth). We intended to do this from several different cruises to European waters, but then Covid struck.

Covid aside, the task at hand remains to make the best possible estimates of mesopelagic fish biomass. To do this we will have to combine data from several different sampling techniques because we recognise that most individual techniques have limitations: for example, net samples are biased by mesh-size selectivity and avoidance; the depth of penetration of sound from surface echosounders is limited by the physics of sound propagation, and video sampling is limited by light availability and water clarity.

The main sources of uncertainty in analysis of acoustic survey data include a) determining what organisms (or ‘targets’) the detected echoes were backscattered from, and b) scaling the backscattered echo-energy to biomass. Sound is backscattered strongly at density interfaces such as the fish-body-to-swimbladder boundary in fish that have gas-filled swimbladders, but low-biomass gelatinous plankton including siphonophores have gas inclusions that are also strong sound scatterers: in some circumstances it can be difficult to conclude whether measured echo energy has returned from aggregations of fish or jelly… Net sampling does not always help because fish can avoid nets, and siphonophores – which are delicate – can be mashed by them, and nets can come up empty even when fished through rich communities. If we do not know what the detected echoes were caused by, we cannot scale echo intensity to biomass because we do not know what the appropriate Target Strength is (TS is a measure of the proportion of incident sound backscattered by an object; it varies as a function of acoustic frequency and target size amongst other things).

One way to tackle the problem of target identification is to make coupled acoustic and photographic observations, i.e. to take photographs of the animals that the echoes are returning from. We set about building a combined multifrequency-echosounder and stereo-photographic instrument that could be lowered into the mesopelagic zone to gather identity and TS data on organisms there. We won a Capital Equipment grant in September 2019 from the UK’s Natural Environment Research Council to build what we called the ‘Seaquest DSV’: DSV was originally an acronym for the Deep Submergence Vehicle in the 1990s US TV series Seaquest, be we reappropriated it for Deep-water Sonar and Visual sampler (for exploring the marine twilight zone). The instrument comprises a Simrad WBAT broadband echosounder and a pair of stereo underwater cameras with red and white lights combined on a compact frame. It was important that the complete instrument package be as compact as possible to minimise disturbance to, and hence avoidance by, organisms in the mesopelagic zone. The cameras, their controller-units and lights were custom-housed for us by Marine Imaging Technologies, a US company that was involved in the hunt for the Apollo 11 rocket engines in the sea off Florida in 2012. Unfortunately, MIT were hit badly by the pandemic, and delivery of the cameras was much delayed.

The WBAT part of the system was used on the SUMMER/CSIC cruise from Barcelona to Vigo in October 2020, and we have this year been able to assemble the entire package (see photos). We have calibrated the stereo cameras (by filming a 3D cube of known dimensions), and are looking forward now to the first opportunity to deploy the DSV into the mesopelagic zone, hopefully before the end of summer (let alone the end of SUMMER). 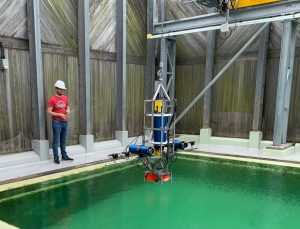 Roland Proud watches the Seaquest DSV being lowered into a test tank at the Scottish Oceans Institute. Echosounder transducers (orange components at base of Seaquest DSV) are configured for vertical observation here, but the intention in the field would be to orient them horizontally to sample the same volume of water illuminated and observed by the cameras. 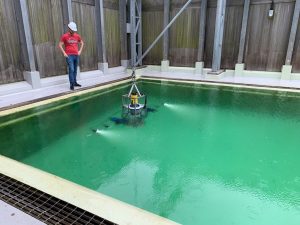 The Seaquest DSV partially submerged, with white lights on. 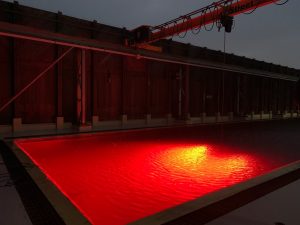 The Seaquest DSV fully submerged, with red lights on.

All photos by Yang Yang