Modelling the mesopelagic game of hide-and-seek in the ocean

Modelling the mesopelagic game of hide-and-seek in the ocean

The Reykjavik FAO Expert Consultation [1] interpreted an ecosystem approach to fisheries as meaning that management should not only consider the conservation of targeted species but also the wide range of non-target species affected directly or indirectly by fishing, so as to sustain the integrity of the food web and the supply of ecosystem services.

Implementations of an ecosystem approach often concentrate on geographically-based measures designed to physically isolate sensitive habitats and vulnerable species from the direct effects of fishing, for example through oceanic-island and shelf-sea marine protected areas. The emphasis is on horizontal separation of human activity from sensitive marine features or species. The scale and likely success of such measures will depend in part on horizontal patterns of physical and trophic connectivity, i.e. how material is transported around by currents, who-eats-whom, and their frequency of encounter.

SUMMER is addressing the question of how to implement an ecosystem approach to fishing for mesopelagic organisms in an open-ocean situation. Here, the key issues are vertical physics which determines the distributions of nutrients, detritus and primary producers, and active vertical migration behaviours which determine trophic connectivity in the invertebrate and vertebrate food web. The scientific challenge is to unravel the details of how mobile organisms engage in a game of vertical hide-and-seek between the warm sunlit surface layers and the cold dark interior of the ocean, trading-off the need-to-feed with exposure to predation risk.

The modelling group at the University of Strathclyde is addressing the problem through dynamic end-to-end modelling of the ocean food web (microbes to megafauna). The approach builds on aspects of a recently published shelf-sea food web model developed as a package for the R statistical computing environment (StrathE2E [2]). The model has two linked components – a fishing fleet model and an ecology model. In SUMMER the StrathE2E shelf-sea ecology model is being replaced by a discrete-layer vertically resolved ocean food web model. Nutrients, detritus and microplankton are modelled in each layer by more-or-less standard ‘box model’ methodology driven by light and externally prescribed physics (temperature and mixing). Zooplankton, larger invertebrates, fish, cetaceans and seabirds are dynamically distributed across the layers depending on a trade-off between encounter with prey and encounter with predators. Vertical distributions are then emergent properties arising from this optimisation process for each guild of organisms given their physiological traits (e.g. temperature sensitivity, light dependency for feeding), their own prey preferences, and the preferences and traits of their potential predators and competitors.

The fishing fleet model represents the harvest rates and discard rates for each guild of orgaanisms in the model, integrated over multiple types of fishing gears, for example trawls, longlines, gillnets. In SUMMER, these rates will be resolved not by horizontal compartments as in the existing StrathE2E model, but by vertical layers. The objective is to build a system that can be used to conduct scenario experiments on, for example, the selectivity patterns and fishing depths of different gears, on the nutrient fluxes through the entire food web as measured by network indices and production rates, and under climate projection scenarios.

The physics drivers for the ocean food web model are being extracted from output of a global ocean circulation and biogeochemistry model – the quarter-degree latitude/longitude NEMO-MEDUSA model operated by the UK National Oceanography Centre [3]. Data for the Atlantic Ocean region at 5-day intervals for the period 1980-2099, assuming RCP8.5 during the projection phase, are available for SUMMER. An R package has been developed to interrogate these data and extract the properties needed to drive our ocean food web model at any given location.

Currently the work is focussing on the Irminger Sea as a location with a comprehensive set of field data for calibration and validation of the model. The data cover physics, micro- and meso- and macrozooplankton and mesopelagic fish from a variety of sources – four surveys spanning winter 2001 through to winter 2002 during the UK Marine Productivity Programme [4; Figure 1, 2], survey and catch data from the fishery for redfish (Sebastes mentella) in the region, and data from Icelandic surveys including abundance and diets of tuna and cetaceans. Example time series of some of the data extracted from the NEMO-MEDUSA outputs, which act as inputs to our food web model, are shown in Figure 3. 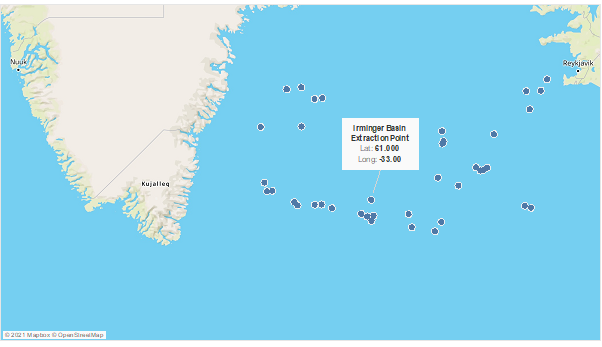 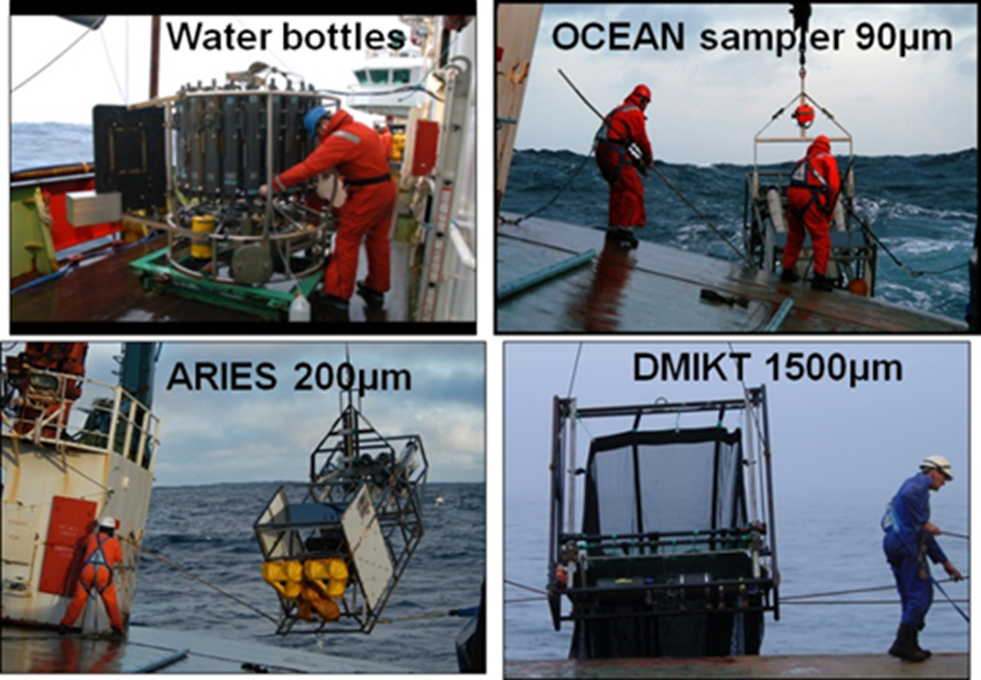 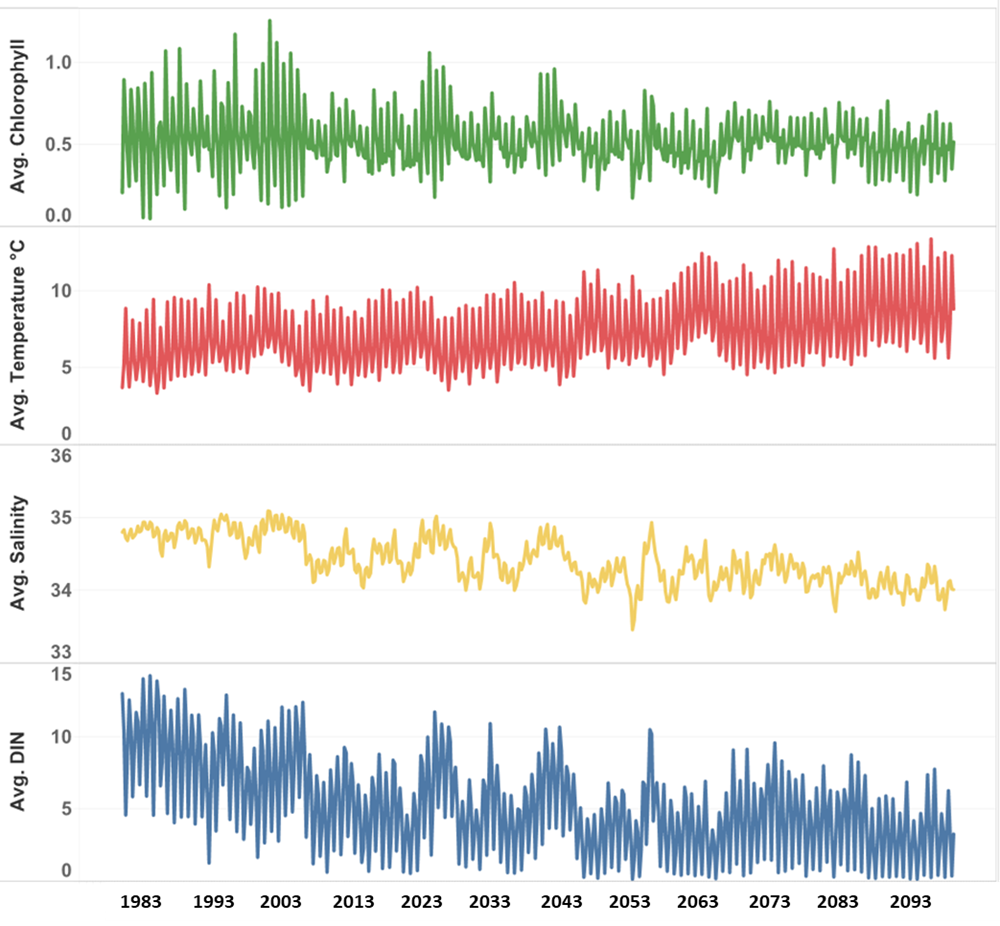 About the Author: Guro Tveit