The oceanic mesopelagic or twilight zone (from 200 to 1000 m depth) is inhabited by a huge variety of organisms represented by several zoological groups, both vertebrates and invertebrates. These mesopelagic species play an important role in oceanic predator-prey interactions. They all constitute the most important food elements for larger top predators, fish and mammals, and they are themselves also predators of primary consumers (small zooplankton). Thus, mesopelagic ecological communities are generally composed by small-sized organisms present in high abundances. Concerning size, the most numerous and diverse taxa are named as macrozooplankton, (which prey on smaller zooplankton, and micronekton comprising small fish, shrimps, and cephalopods (which prey on macroplankton). Other organisms, less abundant but with higher biomass, such as for example some eels, oar fish, and even some cartilaginous fish, as well of some large cephalopods, also are part of  the mesopelagic fauna.

The most relevant taxonomic group among mesopelagic macrozooplankton is that of euphausiid crustaceans, also known as krill (Fig. 1), which may form large schools that daily move up and down from deep to shallower waters, or even to surface waters while descending to deep water in the day where they stay until the following sunset to return to shallower waters to forage during the night. Other taxa such as amphipods (Fig. 2), although being less abundant, are common in mesopelagic samples, and constitute an important prey source for micronekton species [We biologists often differentiate between commonness (based on presence or absence information, and abundance/density, based on number of individuals]. Gelatinous macrozooplankton, represented by salps (Fig. 3), jellyfish and siphonophores (By-the-wind sailor, and others) are common, and sometimes very abundant, in all seas. 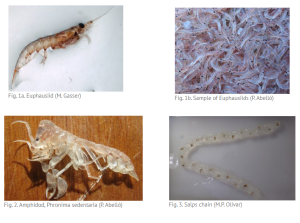 Among micronekton, fish and decapod crustaceans are the main components, both in number and frequency of occurrence. Cephalopods, although known to be highly important for the community, are more elusive to midwater trawls and, therefore the information available for this group is much scarcer. They need to be sampled with other devices.

Morphological features of mesopelagic fish are related to its function to address the constraints imposed by the mesopelagic environment. The very names of the fishes already point out to some of their morphological traits: e.g., lanternfish and lightfish that have their ventral body covered by luminous organs (photophores), which conceal their body silhouettes through counterillumination (Fig. 4); hatchetfishes, with a very deep frontal part of the body and a short tail, and with silvery body flanks (Fig. 5), or dragonfishes, characterized by long fang teeth which give them the appearance of fierce predators (Fig. 6). 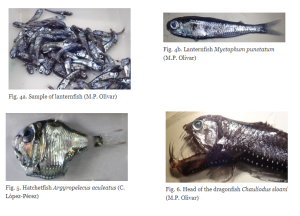 The species richness of these groups of fishes is really high. Only in the Northeast Atlantic the total number of lanternfishes (Order Myctophiformes) is 60 and of lightfishes and dragonfishes (Order Stomiiformes) approaches 90 species. The surveys carried out within the SUMMER project are adding new insights into our knowledge on the diversity of this community, and provide evidence of the differences between the Atlantic and the Mediterranean in terms of , for example species richness, which is much lower in the Mediterranean (Access the full article here:  DOI: 10.3389/fmars.2022.1028717).

Concerning large crustaceans (shrimps and krill), it is worth remarking the adaptive biological characteristics that provide increased survival chances in this extremely large three-dimensional environment as is the (deep) oceanic environment. Thus most pelagic shrimps are either (very) transparent, or reddish. Transparency provides them, obviously, with a larger probability of being unseen, and therefore of being predated. This feature is obviously useful/adaptive for those species that inhabit epipelagic environments or deeper areas in locations where primary production or turbidity is low and therefore light penetrates into relatively deep regions. This may be the case of the glass shrimps, such as Pasiphaea sivado (Fig. 7), or most krill species. Another characteristic to restrict being detected by vision in deep waters is to have a red colouration, since red light is the first wavelength to disappear with depth. This would provide invisibility for those species being red, or reddish, such as, for example, Gennadas elegans, Robustosergia robusta, and most deep-sea shrimp species  (Fig. 8). 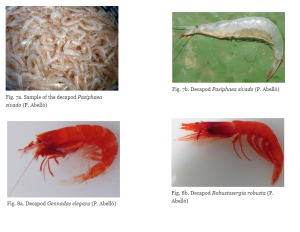